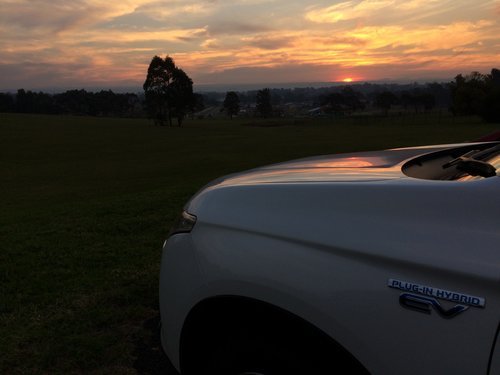 It is now exactly two years since I purchased my Mitsubishi Outlander Plug in Hybrid Electric Vehicle. This is a good point to consider the long term ownership of the car, and whether my expectations and the promises made by the manufacturer were met.

First, let’s look at the data;

How does it work?

The Outlander is a battery electric plug in hybrid (PHEV). It has a pure electric drive train which it will use for up to 50km of range, at which point it will turn itself into a traditional “Prius” style generation 1 hybrid, using a petrol engine and regenerative braking.

The petrol engine itself has two modes of operation, the first is to charge the battery to use the electric drive train to turn the wheels. Above 70kph the petrol engine will switch over to directly powering the front wheels of the vehicle through a traditional fossil fuel drive train. So unlike pure electric vehicles, the Outlander is a complex interaction between electric and fossil drive trains.

How reliable is it?

This complexity of these two systems interacting concerned me when I purchased the vehicle. I wasn’t sure if it would be reliable but it has been fine. Nothing has mechanically failed on the vehicle. I have serviced it at the required intervals, nothing has been replaced, not even brake pads. That’s possibly because the regenerative braking reduces wear and tear on the traditional braking system.

How efficient is it?

Over the two years I’ve had a wide variety of commuting distances to work with. You can read back through my other posts for those tests. The most recent few months has been long distance commuting of 150-200km/day. This has been a mixture of start-stop city traffic and high speed freeway driving. This is well beyond the battery range, and is exactly the sort of distances that prevented me from choosing pure EV’s such as the BMW i3 or Nissan Leaf when I bought the car. At this range, the average fuel consumption is 4.0L/100km.

That beats the rated numbers for a Prius and is a very respectable number for an SUV. When I purchased the car the fact it was an SUV was secondary. I wanted the best battery range with minimal trade offs. I considered the Volt from GM, but it was only 4 seats which doesn’t work for a family of 5. Since that time a number of other makers have released similar vehicles, especially the European luxury brands. I’ve been surprised at how much I like all wheel drive. The freedom to confidently (and silently) drive down a fire trail in the bush is satisfying. It’s also handy on a steep driveway.

Has the battery degraded?

When I bought the car I wondered how the battery would hold up over time. The Outlander doesn’t have a battery “meter”. It has a projected range estimate based on driving style and climate control. When new, the battery is rated to drive 50km. I found that was realistic without climate control. I noted milestones of points I’d reach at certain projected ranges, or how far I’d get before the battery was exhausted. Those milestones have not changed. There is possibly 1-2km of range loss in 2 years, but nothing I’m concerned about.

Is there a “best” way to drive it?

Yes. If you are a lead foot, you’ll be burning through electrons. If the road is wet, you use more energy to travel the same distance as you displace water on the road. If you go up steep hills, you’ll drain the battery. If you use climate control, the battery will be used for that instead of turning the wheels.

The car will seamlessly switch over to petrol when the battery runs out but I’ve learned a couple of simple rules;

Low speeds: The electric drive train is most efficient at speeds up to around 60kph. Sitting still at lights or in traffic costs you no energy. Steady acceleration and using regenerative braking gives you maximum range. At low speeds, when you run out of battery the engine will come on and act as a generator to power the electric drive train. Using fuel in this mode is less efficient than at high speeds.

High speeds: Distance is key to efficient high speed driving. Above 70kph the battery gets drained more rapidly and it becomes more efficient to force the petrol engine into service. There are two modes to choose;

Learn to use regenerative brakes. This is a big adjustment from a traditional car. The Outlander has paddles on the steering wheel that can be used to turn up or down the power of the regenerative brakes. Braking this way becomes so normal that it is very strange to be in a car without it.

Overall the car is performing well. The technology that seemed so new 2 years ago now seems normal, and soon to be surpassed. I’m very happy with the performance of the car, and I still get a buzz from knowing that the power from my roof drives me to the shops and back.