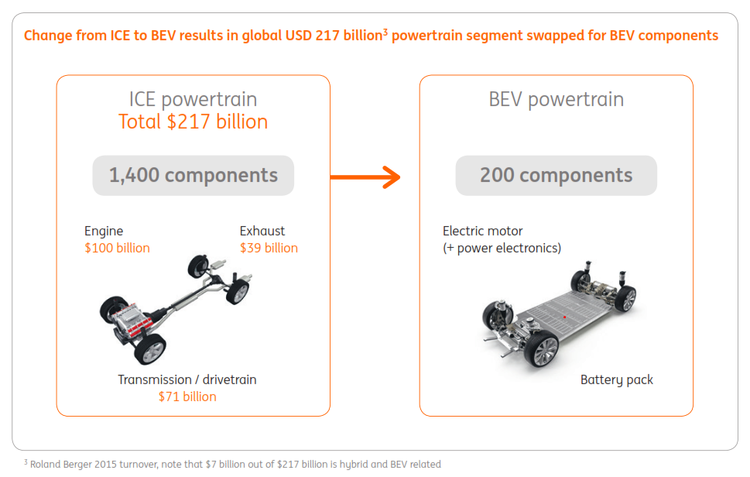 A few things have happened in the last few weeks that are fairly significant. You may have heard about;

Meanwhile, there have been two separate market analyst reports, which have quantified the economic impacts of EV’s on the industry;

The lead times for design and manufacture of vehicles is measured in years, with massive investments in infrastructure and complex changes to production lines and supply chain. Manufacturers have been scrambling to respond to Tesla’s success and the emissions cheating scandals.

The key take-outs from these reports are;

The 5 year window from 2025-2030 is the tipping point for private vehicles. By the time we hit 2040 when bans on new fossil vehicles are set to kick in, it’s likely the market will have already voted. The exact timing of the first tipping point of total cost of ownership will depend on oil prices. It’s inevitable to happen though, for the simple reason that EV’s are simpler vehicles mechanically, as the ING report shows, from 1400 components to 200 in an EV. That will provide a competitive advantage for EV’s.

The most important thing in my mind is how the reports from financial market analysts, line up with each other. These are not environmental advocates who want something to be true, they are people looking at the movement of markets and how investments are being made. There’s a big difference between predictions that are popular sentiment and predictions that are based on people putting their money where their mouth is.

Until now, manufacturers have been tentative with EV’s but that has changed. Here’s where the money is going;

The CEO of Renault/Nissan Carlos Ghosn was in Sydney a couple of months ago. He spoke about the future of the auto industry at a Sydney Ideas event I attended. I asked him a question about the economics of the industry and mass market adoption. He said there were three things they now knew;

All of this has some macro-economic and potential policy impacts;